Emotional Multiplicities in Multi-Sourced Work, page 11 of 15
Previous page on path     Next page on path

You appear to be using an older verion of Internet Explorer. For the best experience please upgrade your IE version or switch to a another web browser.

Korsakow is an interactive platform to create database films, originally designed in Macromedia Director by Florian Thalhofer in the late 90s. Later a team at Concordia University in Montreal helped Florian with the redevelopment of the platform to open source and it’s now available for participants to use and download from the web.

Korsakow Films are films with a twist: They are interactive – the viewer has influence on the K-Film. They are rule-based – the author decides on the rules by which the scenes relate to each other, but s/he does not create fixed paths. K-Films are generative – the order of the scenes is calculated while viewing. And, as Florian likes to say, Korsakow is not a religion.

The basic structure allows the author to create a series of SNUs, smallest narrative units. The SNU can be any duration and the author assigns tags/keywords to each of the units. The author can then create a set of rules in how viewers/participants navigate from SNU to SNU.  To create the navigation, authors use a POC or Point of Contact which is described not as a link so much as a possibility of a link to move from SNU to SNU.

Although Korsakow is not a crowdsourced platform, its design and use of SNUs and POCs through the keyword/tagging system could provide a possible structure into how participants could synthesis the horizontal and vertical levels to help generate emotional engagement within crowdsourced, interactive, work.

It’s with that in mind that we interviewed Florian Thalhofer about how the Korsakow structure and resulting films could generate (or not) emotional engagement with viewers.

Q:  How does Korsakow differ from linear works in this respect?

Korsakow is a System, a tool that you can use to author linear works (well, I have never seen someone doing that), multilinear works (that's what people are usually do when they start - they draw maps and flowcharts), and then possibly "True Korsakow films." These films are rule-based and it's important that the author (or a defined group of authors) interprets the content of the material into rules so that, as an result, the Korsakow software finds connections and patterns. The trick for the author is to avoid anything concrete, otherwise the possibilities become dumbed down.

We are the result of a very linear culture (which might be about to change) and our thinking is influenced by linear film. For authors it seem often to be quite difficult to let go of control and responsibility.

A "true Korsakow-Film" should be like an open experiment, where the author(s) decide on the ingredients but not on the (possible) results. Nevertheless the author can make his voice and opinion visible, but it should just be one voice among others.

Q:  Can you describe how Korsakow is different from a Vimeo or YouTube channel or other digital media viewing systems?

A:  Korsakow (the authoring tool) guides the author to an open but not random way of story-telling. Unfortunately I am not very informed about how a YouTube or Vimeo channel works.

Q:  How do you expect viewers to interact with the work?  How much time do you anticipate they’ll spend at one sitting?

A:  Most Korsakow-films are interactive (the viewer, can select the bit he or she wants to see next). Now, I prefer to screen automated installations, which means the clips come without user interaction and in variations just like an 'interactive' Korsakow-film. So the computer mimics the decisions of a viewer. I used to say that the interactivity just has to be there to 'prove' that the film is not linear. Nowadays, however, as people are more and more familiar with rule-based systems, you don't have to 'prove' non-linearity any more. Interactivity adds a little salt, a little something to the experience. Sometimes it should be a more salty, sometimes less, depends on the project. Not all projects profit from being interactive. For the Korsakow-Shows it is really important, for my film, Planet Galata, not so much.

I would like people to see the whole project. Each time the length differs; my films are usually around 70 minutes. Some might look at it in one go, others might come back and start from where they left off, just like a book. Both methods are good!

Q:  How does Korsakow encourage navigation?

A:  Authors are able to build a concrete navigation with Korsakow. But Korsakow doesn't necessarily encourage them to be concrete – being too concrete limits possibilities ;-). The strength of Korsakow is that it gives authors the possibility to build loose navigations.

Q:  How does Korsakow see people as making meaning from the interactive experience?

A:  Korsakow is a tool, so it depends very much on how the author structures his or her Korsakow-film. Korsakow allows the interaction to function less in the foreground. And from the works I have seen, I would say the more obvious the interaction, the more educational. And, these are not necessarily the projects I love.

Q:  And as a follow up, given that Korsakow removes the cause-and-effect structure of traditional narrative, how does it draw the viewer into the "story"? What's the motivation for the user to keep watching? What's the alternative means of engagement?

A:  Korsakow also allows authors to build projects with the cause-and-effect structure of traditional narrative, but most authors choose not to take that option. That is interesting! Obviously it is very liberating for authors to be able to break out of that strangling form. So first there is a motivation for the author, but what is the motivation for the viewer? It liberates him or her as well. He/she is far more encouraged to use his/her own brain. To think for him/herself. If you look for example at political films/reportage, a viewer can make use of his/her brain, too, but his/her conclusion is one of "I agree" or "I don't agree", regarding the whole film/reportage. And it is quite hard to not agree with a convincing, in-itself well-put story.

As a result of this cause-and-effect structure of traditional narratives, linear films tend towards extremes. I guess it is because the cause and effect is more convincingly argued in extreme examples.

Let me make a little sketch: 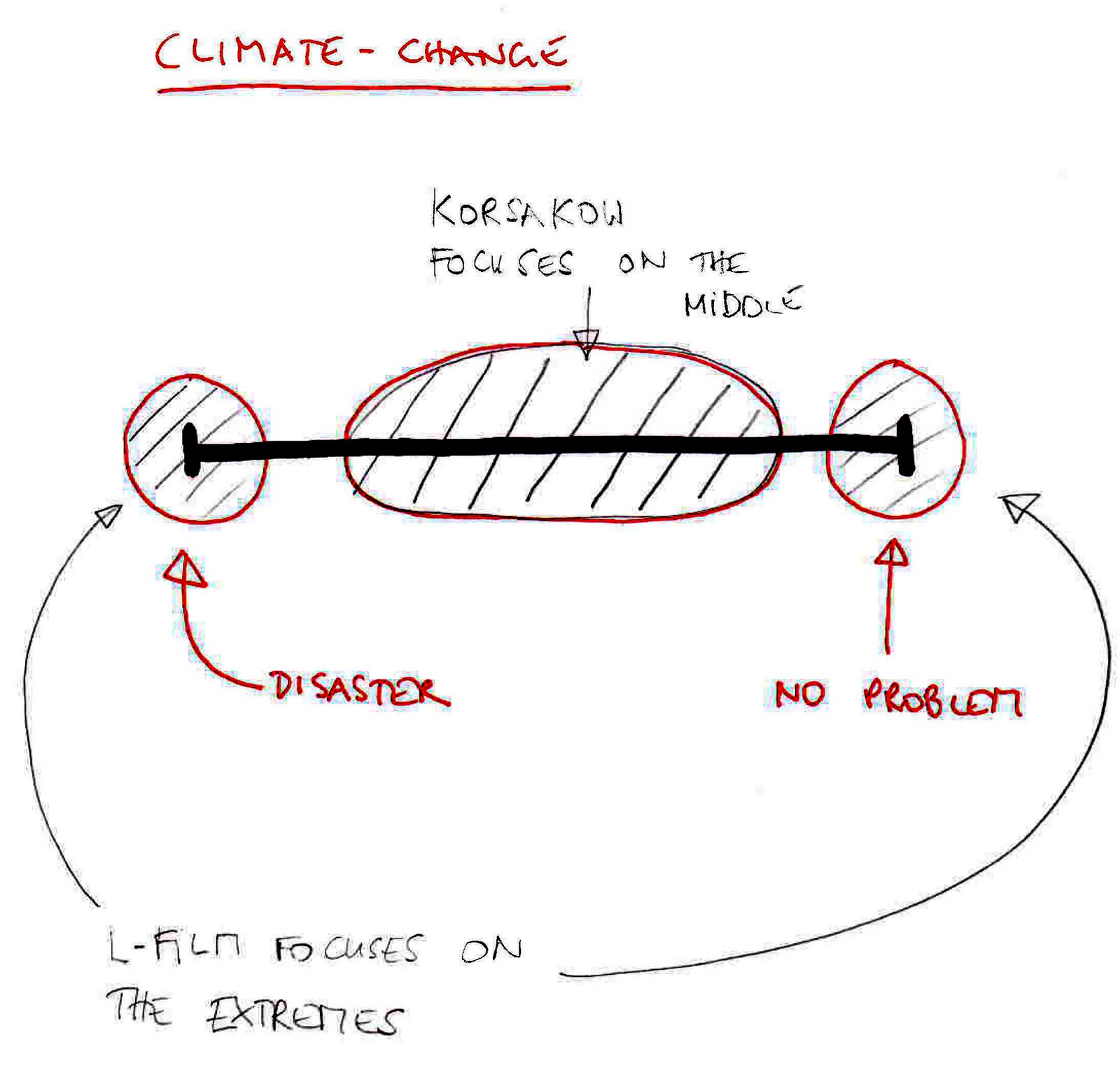 In this example the topic is "climate change". If you want to make a film about climate change and you go to a producer, he wants you to focus on the extremes, because "this is what is interesting." And he is right, in terms of linear-film (which is the dominant form of narrative in our time).

I myself (and I think more and more people), don't think any more that the extremes are interesting. Why? Real life lives in the middle, not in the extremes. Extremes, at least in my life, are not very common. And, solutions for problems often exist in a middle ground. The problem of climate change will not be solved in the extremes. And focusing on the extremes makes us blind to the most interesting part. Extremes are usually irrelevant, totally boring.

I am engaged because I am interested. Not because someone shouts "You will not believe this!" at me. I have heard that a million times already...

Answering the questions I realize that I am wearing two hats: One as the maker of Korsakow and one as an author of Korsakow-films and projects. These are two very different standpoints. The tool allows for very different kinds of projects. And I have a particular style – the way I like to use Korsakow in my own work. As an author of Korsakow-projects, I can give advice on how to use the tool. But as the inventor of the tool, I am also aware that there must be other successful approaches.

Haha – this is very much a Korsakow-statement in itself: Yes, I have an opinion, but I am aware that it might not be the only right one.

Q:  Can you recommend a couple of Korsakow works (for our readers) that illustrate these points?

Add your voice to this discussion.

Checking your signed in status ...

You are signed in as (Sign out).  Enter your comment below. Submissions are moderated. Please be respectful.